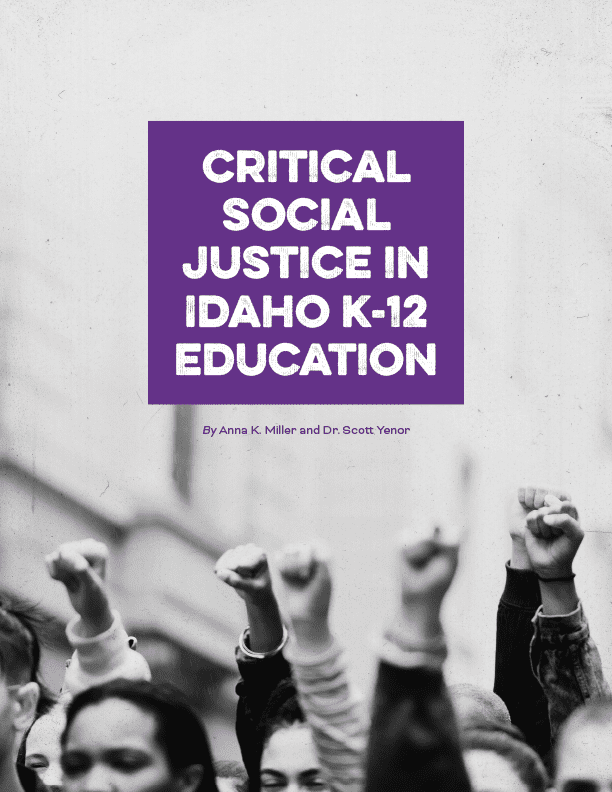 Critical Social Justice (CSJ) is written into the DNA of Idaho’s public education system. At the most fundamental level, Idaho’s education system is designed to replace the influence of parents on the opinions and sentiments of children with the influence of public institutions. Our public education system emphasizes the principles of CSJ, a false and harmful anti-American, anti-Christian ideology that sows racial hatred, gender confusion, and resentment. There is no making peace with this imperial ideology. It must either be rooted out of our system (a tall task) or parents must be assisted in walking away from the system.

Idaho has many solid laws that discourage CSJ education. But these laws are undermined by other state regulations and federal programs. Idaho has been participating in the Common Core program since 2014, for instance. Common Core was a centrally planned attempt to establish level academic standards. Aside from the negative externalities of centrally planning classroom instruction, the common core was corrupted by CSJ and became a vehicle for teaching anti-white, anti-male hatred in schools. Idaho also adopts accreditation standards and curriculum from national institutions promoting CSJ, and it is also embedded in teacher certification standards. The most easily available curriculum peddles the ideology. Teacher training often expands the ideology. Through these means, Idaho’s education system comes to resemble education systems in other parts of the country.

Furthermore, our State Board of Education (SBOE) and many public school districts have made conscious and revocable decisions to expand upon the framework sown into our national and regional institutions. For example, the SBOE adopted certification standards requiring teachers and professional school personnel to be trained in culturally responsive teaching, and many of the states largest school districts have adopted the anti-racist social emotional learning curriculum known as Second Step (See Section I).
Addressing this problem requires that we understand the many layers governing Idaho’s education system and how far CSJ has advanced within that system.

Section I of this report describes the ambitions of CSJ in education, describes the common vehicles used to promulgate the ideology in schools, and assesses how far the ideology has advanced in statewide school programs, policies and curriculum.

Section II identifies who is responsible for promoting CSJ in the education system among varying levels of government bureaucracy, special interests, and national trends, and what can be done to stop its advancement.